Our Ghost Hunts at Glore Psychiatric Museum in St. Joseph, Missouri satisfies the intriguing lure of the Lunatic Asylums of the 19th and 20th Century.

Listed as one of the top 50 most unique museums in the world and one of the most haunted locations in Missouri.

The paranormal that has been captured here is formidable.

The museum is housed in the state’s former lunatic asylum where the patients still linger in the shadows!

The hauntings that have been documented and experienced in the museum started long before the St. Joseph’s State Hospital closed its doors and converted the corridors for educational purposes.

Your ghost hunt at Glore Psychiatric Museum includes the following:

History Tour from 10am until 5pm.

Exclusive access to the most haunted areas of this psychiatric museum.

In 1872, the Missouri State Assembly decided to address the issue of their overpopulated Asylum by building The State Lunatic Asylum No. 2 in St. Joseph, MO.

The facility was originally built to house 275 beds and received their first 25 transferred patients on November 9, 1874.

The influx of patients from both the State Lunatic Asylum No. 1 and the Buchanan County Poor Farm included a large number of Civil War Veterans and other patients whose families were unable to meet the special needs of those suffering with mental illness.

The hospital served the people of Missouri and their patients for the next 127 years and grew to house over 3000 patients.

The State Lunatic Asylum No. 2 began as a self-sufficient institution where the patients would raise crops and tend livestock to fill all their nutritional needs.

One source even claims that the only purchases the institution needed to make were salt and sugar for supplemental purposes.

In 1899 the institution was renamed St. Joseph State Hospital and continued to follow the state-of-the-art trends in mental illness treatment until they closed in 1997.

The degrees of mental illness varied in the patients of the hospital ranging from those who were considered to be criminally insane to those who were able to receive rehabilitating care.

There are also documented cases of people who merely suffered from depression, but their families considered them to be a nuisance, so they were committed to St. Joseph’s.

One such patient has her diagnosis hanging on the wall in the medical portion of the museum that reads “She was lazy with her housework and over concerned with the welfare of her children.”

With the vast amount of medications and procedures for treating people with mental illness during that time, many patients were able to be reintegrated into society.

But there are also those who would spend their lives behind those walls participating in experimental, as well as, state-of-the-art procedures that likely added to their illnesses.

What was considered medical strides at the time is now considered barbaric.

George Glore, a longtime employee of the Missouri Department of Mental Health, decided to document the progression and evolution of the treatment of mental illness and opened a museum on one of the wards of St. Joseph’s in 1967.

Included in the display were replicas of devices used in the 16th, 17th, and 18th centuries.  Glore continued to add to this collection that would raise mental health awareness throughout his 41-year-career.

With the introduction of psychotropic drugs and other medications to treat mental illness, most of the patients of St. Joseph’s had been released back into society by the 1990’s.

The other patients were eventually transferred to the new psychiatric rehabilitation center and the campus of St. Joseph’s was parceled out to the prison, a children’s psychiatric hospital and the Glore Psychiatric Museum.

The lingering presence of patients and hospital staff can be felt throughout the corridors of the museum.

The building itself played home to thousands of patients that have never left but there is definitely a connection to the objects and macabre objects that decorate the hallways.

Dousing tanks, cages, dungeons, electroshock therapy, hydrotherapy, fever cabinets, lobotomy, tranquilizer chair—where patients may have been strapped in for up to six months being subjected to bloodletting, scalding hot water and ice-cold water.

The treatment of mental illness often toed the line of humane treatment.

The museum also houses several items that used to belong to the actual patients and may still hold an affection for their spirits in the afterlife.

Letters, artwork, a collection of 100,000 cigarette packages that a former patient hoarded thinking he could turn them in for a new wheelchair for the ward, and an old television from a day room that patients used to slip letters inside because they thought to communicate with the outside world.

There is also a display of over 1400 metal objects including nails, bottle caps and buttons.

In 1929, a woman who suffered from the illness Pica (a compulsive disorder that leads to the eating of substances that offer no nutritional value), had swallowed all 1400 items before the doctors discovered it.

Although she had lived fine with those metal objects inside of her she died during the surgery to remove them.

The Glore Psychiatric Museum is a fascinating yet heart wrenching experience that will open your eyes to the suffering of this life that sometimes makes a lasting impression on the next.  Will you be able to offer a sense of peace to the spirits that still linger?

The Glore Psychiatric Museum in St. Joseph, Missouri satisfies the intriguing lure of the Lunatic Asylums of the 19th and 20th Century.

Listed as one of the top 50 unique museums in the world and one of the most haunted locations in Missouri, the museum is housed in the state’s former lunatic asylum where the patients still linger in the shadows!

The hauntings that have been documented and experienced in the museum started long before the St. Joseph’s State Hospital closed its doors and converted the corridors for educational purposes.

Paranormal investigators from around the globe have flocked to the location to document the evolutionary history of mental illness treatment and communicate with those who were victims to their barbaric practices!

The thousands of patients ranged from those who were diagnosed as criminally insane to those who were able to receive rehabilitating treatment and be reintegrated into society.

Among those were the few unfortunate souls who were committed by their families because they “…had become lazy with [their] housework.”

All of the patients were submitted to state-of-the-art mental illness treatments that were considered helpful at the time but in retrospect we realize that some of these so-called treatments were often the cause and not the cure for insanity.

Centrifuge therapy (spinning a patient in a device at high speeds), hydrotherapy (from ice baths that could last for days to scalding patients), cages used to contain patients until they “calmed down,” lobotomies, shock therapy, fever therapy (elevating body temperatures to abnormal levels, often used to treat syphilis which was rampant at the facility), tranquilizer chairs (strapping patients to a chair for weeks at a time using bloodletting with leaches and knives), and several other treatments that horrify our modern minds were all used at St. Joseph’s State Hospital.

The horrifying cures obviously left a terrified mark on the building, but other contributing factors may have led to the hauntings of the corridors.

Many of the patients that were housed at the asylum never had visitors because their families simply abandoned them after they were committed.  In the early years the graves of the patients were unmarked before they were simply engraved with an identifying number.  Does the lack of acknowledgement in their final resting place leave the spirits feeling as unwanted in death as they felt in life?

Around the time George Glore started the display of historical artifacts in the evolution of mental illness treatments in 1967, St. Joseph’s State Hospital began to earn its reputation for being haunted.

The staff would see shadow figures and apparitions roaming the hallways and always felt as if they were being watched.

There was one patient who was known for her interaction with the “spirits” of the institution—she created art, wrote poems and songs detailing her experience with the paranormal activity.

If you’re investigating the morgue, watch for the full-bodied apparition of a man.  He’s often been seen around the elevators and several investigators have caught an EVP (electronic voice phenomena) of a male voice screaming “GET OUT!”

Disembodied whispering is often reported as well as a female voice calling out your name when no one else is around!  Moaning, whimpering, crying—it’s easy to imagine that the sounds are patients still looking for someone who wants to be their friend.

The only question that remains—are you brave enough to undergo a lone vigil in the underground tunnels? 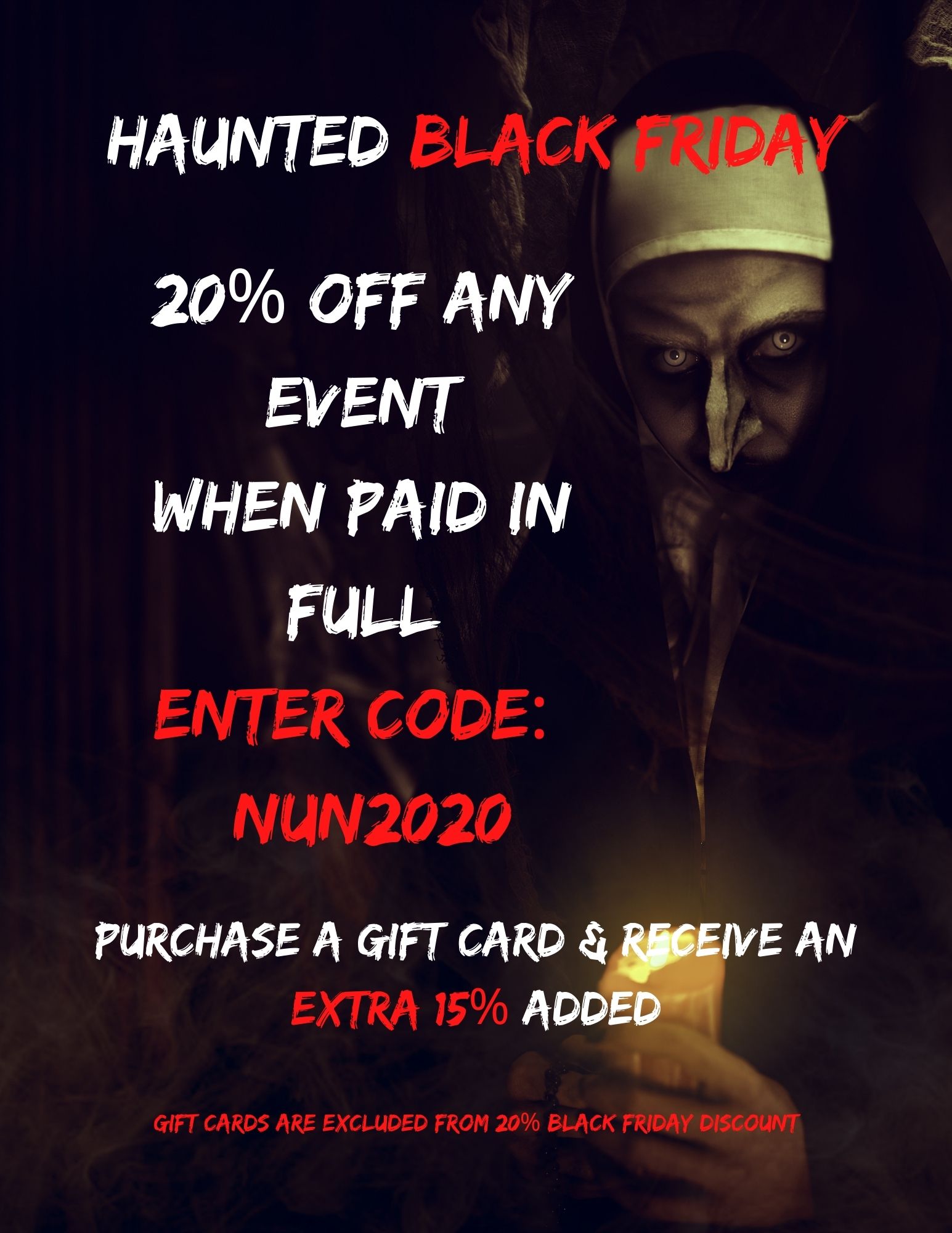